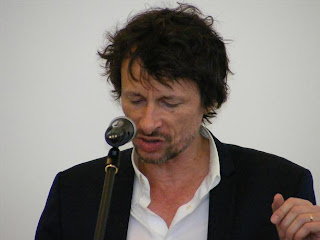 Today should be sub-titled “Steve Taylor Tribute Day”. No, Steve Taylor isn’t dead, he’s alive, well, and extremely active. During 2011 in the music realm he co-wrote much of Peter Furler’s solo release On Fire. He also directed his second feature film, Blue Like Jazz, based on the best-selling book by Donald Miller.

Taylor hosted two sessions at GMA Canada Week in Calgary today. During the first seminar Steve showed as an amusing video describing his varied career as ’80s and ’90s recording artist, his time as record producer and CEO of Squint Entertainment, and his current career as film director.

In the afternoon workshop, Taylor spent time playing songs primarily from the band Sixpence None The Richer. Taylor was instrumental in the band’s success in the marketplace as he strove to improve their sound. The hit single “Kiss Me” was played in a recording produced prior to entering the studio and the much improved final release. Taylor’s talents were displayed as he described the process taken to bring the song up to it’s excellent quality.

Official video of Sixpence None the Richer – “Kiss Me”

This evening Steve Taylor presented a rough cut screening of his new film, Blue Like Jazz, at the Plaza Theatre in Calgary. The film’s theatre release will be in the spring of 2012. After the film presentation the audience was asked to fill out a questionnaire describing their thoughts of the film. I had been eagerly anticipating this showing as I am a fan of Donald Miller’s book.

Please be aware that the film will not be in the same vein as many of the Christian films released in the past few years. Due to language, drug and alcohol use, I would expect the film would be receiving a PG, or more likely, a 14A rating. While the film may not be a family rated affair, it should be kept on your “must see” list.

My impression was that the film was good, but not great. I spoke with Taylor earlier in the day and during the interview I asked how he would be able to take the varied real-life stories and meld them into a cohesive screenplay. Taylor said “it was really a collection of essays … I decided to make the character a 19 year old college student who leaves his fundamentalist South Baptist home to attend Reed College. Donald Miller was up for the idea and collaborated on the screen writing. It’s not a great idea for an author to help with the screen play, but in Don’s case he was a really great collaborator”.

For fans of the book, many details had to be excised to make the film workable. It primarily deals with Miller’s entry into the almost hedonistic atmosphere of the upper echelon Reed College. The character has to deal with students who do not share his upbringing. Miller’s movie character dismisses his Christian faith and his return to Christ only during the very last moments of the film. Negatives for me included the lack of development of the relationship that Miller had with Penny, which was a highlight of the book, and the constant visage of the decadence prevalent at Reed. My final negative is the abrupt end to the film. Little is given to Miller’s start up of the Reed college student Christian organization.

With those negatives not withstanding, it’s a film worth watching. I know I will be out opening weekend and, when available, it will be added to my DVD collection.