Friday morning began with breakfast listening to speaker and worship musician Brian Doerksen leading in a time of worship.  How do creative Christian artists, made in the image of a Creator, create a place of peace and offer something life-giving to those in the community? 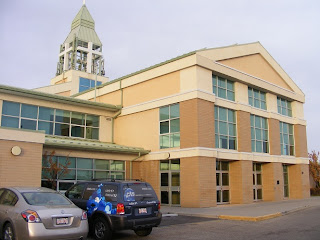 Over lunch artists and attendees involved in radio listened to Geoff Moore as he spoke of his lengthy recording career. He spoke of the role he plays in assisting Compassion Canada. The 2011 Radio awards were presented over the lunch hour.

Friday night. The BIG night. The 33rd Annual Covenant awards and banquet. Artists, the media, and families gathered at 5 in yet another enormous church, Foothills Alliance Church for the festivities.

Artist performances interspersed the announcements of the various Covenant awards.

Some of the performing artists included:

I’ll only be listing a few of the award winners that would interest readers of Christian Rock Files.

Dan McCabe and Tony Rossi were both in attendance to accept the award.

It was an incredible night. A fabulous stage design, lighting and audio showed the performers at the best. During the Covenant awards a series of great emcees announced the awards. Emcees included, Arlen Salte, Connie Scott, Leroy Harder and many others.

This was a great week and I felt really blessed to be a part of our Canadian and Christian culture, but it’s great to be home and, hopefully, in bed before 3 AM.

Wednesday January 13, 9pm EST:
In their own words, Mawcore strives to “Flood our World with Hope-Driven Fearless Rock”. Tune in The Antidote to hear more about their multi-layered sound as we’re joined by Joshua Redding.
Wednesday January 20, 9pm EST:
We spend an hour with a band that’s been in the Christian music scene for decades. Bryan Oleson comes to The Antidote for a chat about how on their latest album, they set out to explore God through the music of U2, Foo Fighters, David Bowie, Tom Petty and many other artists.
Wednesday January 27, 9pm EST:
After Dean Wells became a Christian, he chose to reflect his newfound faith by changing the band name from Terrormaze to Teramaze. Listen to a great conversation about this extraordinary progressive metal band.