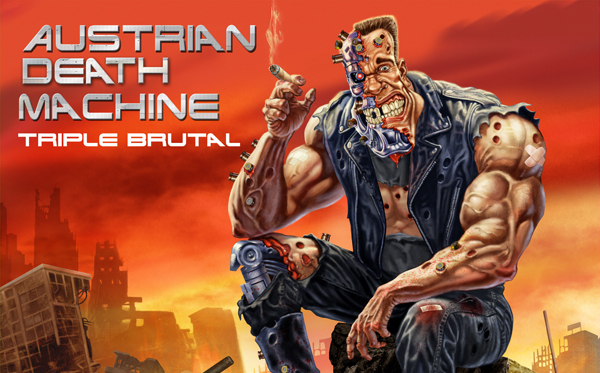 Tim Lambesis is back in the news, but for once it has nothing to do with his solicitation of murder trial. It’s back to music as Austrian Death Machine is set to release their latest effort, Triple Brutal, on April 1st.

Triple Brutal will be made available through Artery Records. Pre-orders can be found through this link.

Here’s a new lyric video for “Prepared to be Conquered”

Wednesday February 17, 9pm EST:
Destiny Lab creates music that ask the listener life examining questions that demand answers. Their unique brand of rap is guaranteed to stretch your view of the world. Get into our talk with Arkalogik.
Wednesday February 24, 9pm EST:
The Antidote goes double punk. We’re assaulted with the hardcore punk of Doulos, then dive into the dark, brooding punk of Cast The Dragon. Tune in for our conversations with each of these newcomer bands who both deliver a faith based message.
Wednesday March 3, 9pm EST:
Sharif Iman masterfully crafts music that boldly speaks to the struggles and the joys of life’s journey. Tune in The Antidote for our conversation with Sharif and new music from a variety of artists.
Wednesday March 10, 9pm EST:
Delivering a soundscape of 80s synth pop harmonized with 90s industrial fused with an onslaught of intense metal guitar riffs, comes the musical child of David Pataconi. David meets with us for chat about his exceptional music.