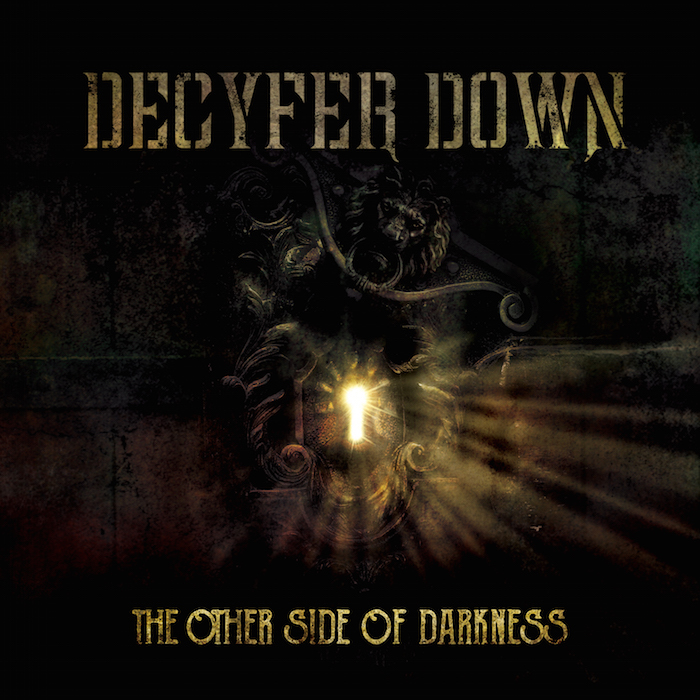 Following Grammy and Dove Award nominations, a trio of best-selling major label albums, and seven chart-topping singles, Decyfer Down returns April 1 with the release of The Other Side Of Darkness through The Fuel Music. The album is available now on iTunes, Amazon.com and many more locations where great music is sold.

After more than a two-year hiatus from recording and touring, the band, collectively Brandon Mills and Chris Clonts (guitars), TJ Harris (vocals/guitar), Benjamin Millhouse (drums) and Chris Furr (bass), is reveling in its newfound freedom as an independent band to write, record, release and perform new music. Making a conscious decision to shatter comfort zones, whether they be artistically or thematically, the band held a no-holds-barred approach to The Other Side Of Darkness.

I know every artist says ‘this is the best album we’ve ever done,’ but there is definitely some of the best sounding stuff we’ve done in a long time just because there are no limits. We can write about whatever we want to write, and we’re not in a box. – Chris Clonts

Featuring the fists-in-the-air first single from the album, “Nothing More”.

“It is truly an out of body experience to listen through this album…with the deep grungy guitar tones and familiar hard hitting drum beats, and who can forget the one of a kind vocal stylings of TJ Harris, who quite possibly has the best voice in the business…10 out 10. Yes, it’s that good!” – Echo Asylum

“Decyfer Down does rock, and they do it well…It’s hard to come away from this as a rockhead not having enjoyed it.” – NewReleaseToday.com

Taking the music from The Other Side Of Darkness, and its list of fan favourites, on the road, Decyfer Down is traveling heavily in 2016. The band is already 20 concerts into the massive, 39-date run on the City Rock Fest 2016 tour with Disciple, Seventh Day Slumber, Spoken and Children 18:3.

Ten years plus of doing this has been a crazy trip, but it’s been awesome. After taking time off and going back out, it’s been great to see some familiar faces. Everyone’s from all different backgrounds and situations, but hopefully we’re all growing. – TJ Harris

We definitely hope people are encouraged and challenged through this record. We love playing everywhere, and we love meeting people. We are just enjoying the whole process again. – Brandon Mills