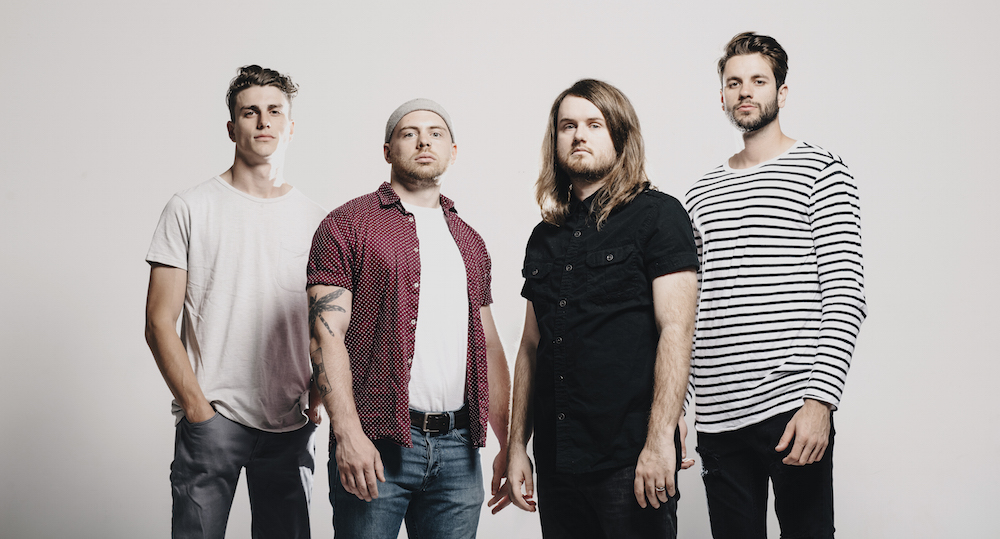 In November of 2015, four days before Fit For A King was set to play a show in Paris, a music venue in the city was violently gunned down by terrorists. The attacks bred a frightened and brittled community, one left mourning the lives of 128 concert goers. It was egregious and horrific, and it tore into the refuge that music fosters. To Fit For A King, it pissed them off.

“There was a big chunk of time after that attack where I was looking over my shoulder,” explains guitarist, Bobby Lynge. “Nobody wants to live their life in fear. Nobody should have to contemplate going to a concert because they’re going to get mowed down by a guy with a machine gun. It’s infuriating that that’s even a thing.”

“We were in Germany during the attacks, and with four days before we were playing Paris, we were all flooded with the reality of death,” remembers the band’s lead vocalist, Ryan Kirby. “I couldn’t stop thinking about how fragile life is, and how deeply death affects you.” He spent the remainder of the tour—with other members Jared Easterling and Tuck O’leary—writing what would turn into Deathgrip, a record that represents not only the inescapable nature of death, but it’s grip over how we all live our lives.

Take the track “Pissed Off,” a song that portrays the band’s emotional reaction to the murders. The lyrics “We live and die in a hopeless world / Laying waste to the innocent with no regret, I’m sick of it,” expose their rage and frustration at continued acts of terror. Overcome by how inevitable tragedy is, Kirby called out to others to share their experiences, too. “I asked our fans to share life stories with us,” he notes, “and I was shocked by how many people wanted to.” The most common theme, flaunting itself over and over again, was death.

For instance, the song “Cold Room” deals with the death of a child. Taken from the experience of a fan who wished to remain anonymous, the track examines a mother’s experience with abortion. After becoming pregnant again later on in life, her struggle to feel worthy as a parent was crippling. Another experience, shared in the song “Dead Memory,” deals with a family member. “My wife’s father abandoned her,” Kirby explains, “so I wrote about death from her perspective—the death of her spirit. She felt abandoned and empty inside.” Lyrics like “Your touch, poisonous / You’re nothing to me / Would you even notice if my world was falling apart? / Would you even care if my heart stopped beating?” engulfs the listener in the poisonous effects of silent desertion. “People can lose their minds over the depression of loss,” notes Kirby. “It has such a grip over our lives; it truly affects how people go about living. Processing through our grief in this record was really therapeutic, and we hope it is for our fans too.”

Musically, the record is just as provoking. Fit For A King returns with just as much grit and moxie, carrying with them a sound similar to past releases Descendants and Creation/Destruction. “We don’t want to be limited to one kind of metal, and we don’t try to mold into one thing,” says Lynge. “We really take pride in that.” “Their flexibly is showcased in their ability to tour with a wide scope of acts, from metalcore, to metal, to hardcore.

The result of their agenda is not only a catalogue of commanding metal music, but a compelling and well-built voice, one that rests on the willing shoulders of a band set on being open handed.

Deathgrip releases October 7/16. Preorders are available through the band website by clicking here.