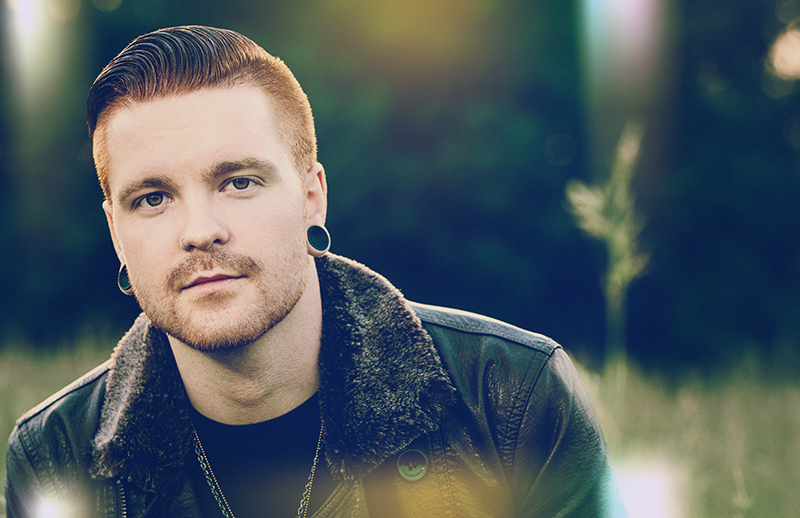 Matty Mullins is putting his unique gift as a singer, songwriter, youth culture ambassador and relatable public figure to work for a purpose much higher than himself.

The powerful frontman of Memphis May Fire, whose motivational metalcore commands the crowds at prestigious festivals like Riot Fest (US), Download (UK) and Soundwave (Australia), has crafted a debut solo album harnessing melody, harmony, top-tier pop grooves with a heartfelt, worshipful devotion to his Christian faith. The electrifyingly diverse 11-song record explores a different side of the multitalented singer, as it hearkens even further back than his most cherished heavy music influences like Blindside or Underoath, to the Christian Contemporary rock and pop his mother took him to see as a kid.

“I’m super thankful for everything I’ve gotten to do in Memphis May Fire and everything we’ve done as a band,” Mullins explains. “The musical opportunities for me to share my message came from metalcore and heavier stuff like that. I love playing heavy music; I think I always will. But as long as I’ve been in music, I’ve wanted to make a record like this, too.”

Mullins cites familiar Christian Contemporary Music touchstones like The Newsboys; Audio Adrenaline; MercyMe; and 40-year-strong hard rockers Petra. These CCM groups shaped his early childhood, setting the stage for when harder edged sounds would enthrall him as a teenager. His solo album – simply entitled Matty Mullins – shares a deep fellowship with those roots.

“DC Talk is one of the greatest groups of all time,” the singer declares enthusiastically. “I love Tenth Avenue North. I love everything Toby Mac does. And I have so much respect for singers like Michael W. Smith and Steven Curtis Chapman; musicians who put so much positivity out there.”

From a songwriting and production standpoint, Matty Mullins solo work is refreshingly modern, yet effortlessly timeless in its earnest sensibility. Longtime collaborator Cameron Mizell, the producing maestro behind records from Memphis May Fire contemporaries like Sleeping With Sirens, Capture The Crown and The Word Alive, took on the instrumental and programming portion. His music runs the gamut from dance floor worthy beats to something one might hear from singer/songwriter Phil Wickham.

The duo first got together to hash out an EP. But after blazing through a half dozen tracks in as many days in Seattle, they felt so enlivened by the process they decided to write enough for a full-length album. The rest of the record was made in Nashville, where Mullins and his wife now reside.

“I took the remainder of the recording budget from the EP and had a studio built in my house,” he explains. “I flew Cameron to Nashville. It was literally just he and I writing and recording together. We put together a really solid record that I’m so proud of and I’m so excited to share with the world.”

Mullins was emphatic that their pop songs be free of boundaries. “Cameron has so much talent, it’s crazy. People don’t realize how much of the stuff he co-writes when he produces. He’s got a huge passion for pop music. He made songs that would sound like hip-hop tracks if I weren’t singing over them. It’s all over the place, but just really tasteful from start to finish.”

“What God really wants isn’t ‘religion.’ It’s relationship,” Mullins says simply. “The song “My Dear” is basically saying that all God ever wanted is a relationship. The rest will be up to Him. If we just trust Him, he will make sure we feel loved, like we have purpose. He’s there. He’s enough. But the biggest, boldest decision we have to make as human beings is whether we really want to trust God or not. ‘My Dear’ is about trusting in God.”

As the singer for an increasingly popular screamo/metalcore band, the smart “career move” for Mullins would be to shy away from such bold declarations. But that’s the beauty of where he’s found himself at age 26; with a renewed purpose for himself, with the ability to make a solo record in the first place, and with the drive to lay his faith on the line for his fans.

“The thing I’m most excited about with this record is that it’s a blatant representation of my faith. Nothing makes me feel stronger in my faith than sharing it with other people. The world is so hardened, it’s hard to talk about your faith. But the more you speak encouragement into other people’s lives, the more you tell them how Jesus fills the void in your life, that following Him isn’t a ‘task,’ it’s transforming and liberating… This record is blatantly about Jesus and who He is to me and who I know he can be for the world, a world that is hurting and looking for something bigger.”