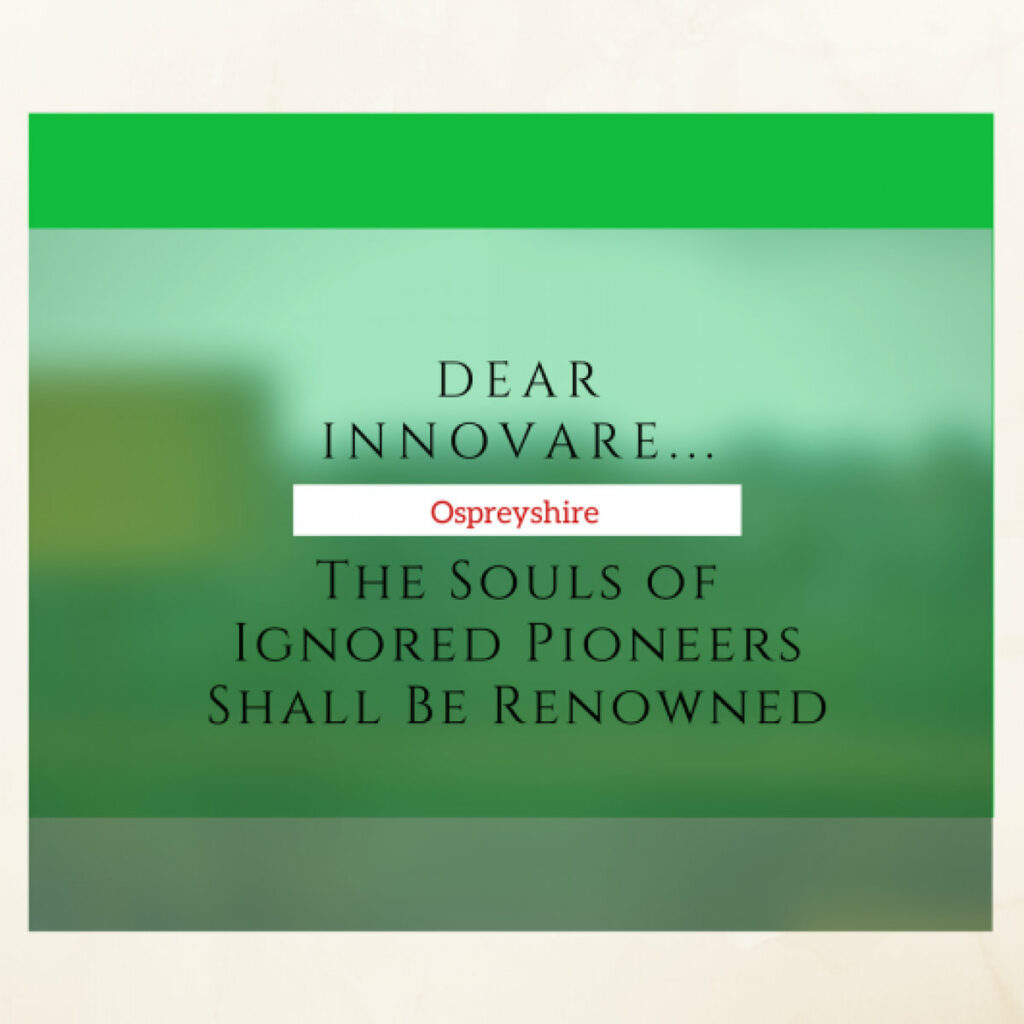 Ospreyshire has been on a roll recording things in 2019 so far. Besides some compilation exclusives and a couple of singles made, and another EP, there was one thing missing in this discography…a full-length album. A long player was lacking and the solution involved poems and songs for a whole new concept album. The final results involved forty-one of them.

Dear Innovare…The Souls of Ignored Pioneers Shall Be Renowned is the first full-length album from Ospreyshire and it is nothing like any previous EPs or singles. While his trademark acousmatics, avant-garde leanings, and spoken word vocals do return, there are more great additions. There are more organic instruments used this time around and there are songs that incorporate some programmed elements. It’s also a genre roulette of sorts as elements of electronic, acoustic, blues, post-rock, digital hardcore, shoegaze, acapella, folk, and even rap show up in some forms. The production is all lo-fi and DIY, but the result only strengthens the truthful narrative in these stories.

This is a concept album much like previous EPs. Verses Vs. Anhedonia was an autobiography dealing with elements of depression. Pathos Formula Wave: One Score of Rage was a compilation of angry letters to those who hurt in him the past. Dear Innovare is a collage of stories and narratives about numerous creators. These stories involve inventors, doctors, engineers, musicians, animators, filmmakers, business owners, and many more. Many of them have been overlooked for several reasons and some of those people were ripped off by those more famous than them. These tracks are homages to those who were forgotten and some of them simultaneously bash the rip-offs in question. Dear Innovare incorporates smaller song or poem cycles that are part of the larger concept. There’s the About A Benjamin trilogy which is about African-American inventors all named Benjamin who have contributed to innovations still used to this day even though the history classes have been neglectful in talking about them. The Art Theft trilogy is about three specific African nations who’ve had their art and artifacts looted while being placed in European museums. Those nations (Benin, Senegal, and Nigeria) are trying to get what’s rightfully theirs. Larceny By Dirigible is a five-part acoustic rock cycle which excoriates a certain classic rock band who made a career on plagiarizing various blues, folk, and other rock artists. In hindsight, they’re a glorified cover band at best. Pugnam Contra Fures Leonis is a interconnected trilogy which covers one of the most controversial film plagiarism scandals in history as a certain franchise is responsible for a legacy of theft, cultural appropriation (while grossly misrepresenting said cultures), and even an attempt to block something original from getting exposure. At the same time, it honors two different musicians and an animated series that were stolen.

Dear Innovare…The Souls of Ignored Pioneers Shall Be Renowned is an ambitious album and certainly the most creative one Ospreyshire has created thus far. Feel free to to be enlightened by these poems and songs while also immersed in his experimental forms of audio art.