The founders of ZAO unveil new music with passion and intensity. To Live As Sons is a driving force of aggressive, hope filled hardcore.  Band members Eric Reeder (founding/former vocals of ZAO) and Mic Cox (founding/former bassist of ZAO) bring Caleb Jones (formerly of Driven), Jake Dorsey (formerly of Courtesy of Epiphany) and Aaron Crozier (formerly of Children of God) together for this project.

Check into a To Live As Sons show as the band goes Facebook Live, May 23rd 7:30pm Eastern. 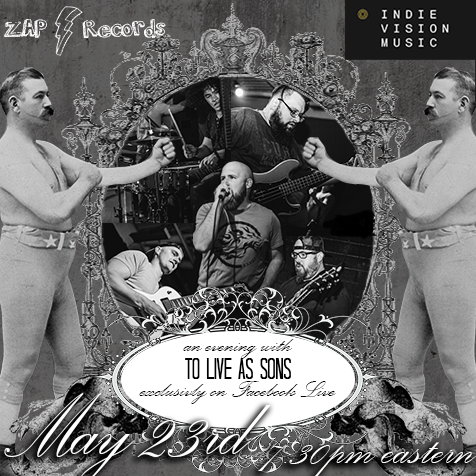 Wednesday January 20, 9pm EST:
We spend an hour with a band that’s been in the Christian music scene for decades. Bryan Oleson comes to The Antidote for a chat about how on their latest album, VOTA set out to explore God through the music of U2, Foo Fighters, David Bowie, Tom Petty and many other artists.
Wednesday January 27, 9pm EST:
After Dean Wells became a Christian, he chose to reflect his newfound faith by changing the band name from Terrormaze to Teramaze. Listen to a great conversation about this extraordinary progressive metal band. Pt 1 of 2.
Wednesday February 3, 9pm EST:
Teramaze bring what can only be described as an utterly unique style to the world of metal. Based in Melbourne, Australia, the band’s blend of progressive, melodic and trash metal has attracted an intense following. Find out more as The Antidote speaks with Dean Wells. Pt 2 of 2.