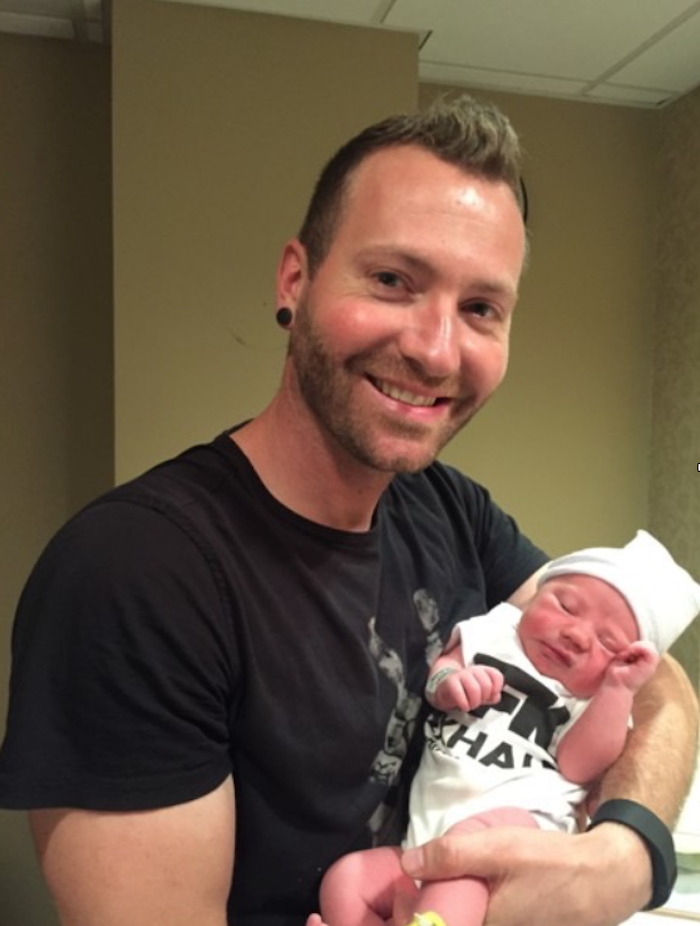 Thousand Foot Krutch lead singer, songwriter and guitarist Trevor McNevan has a lot to celebrate this week. In addition to already hitting No. 1 on iTunes’ Rock Top Albums chart (No. 3 overall albums) in the US with Top 5 overall album placement in Canada, Russia, Australia, Finland and more with Friday’s release of EXHALE, the long-awaited hard-rocking follow up to 2014’s OXYGEN:INHALE, McNevan is the proud dad of a brand new baby girl just in time for Father’s Day weekend. He and his wife, Erin, announce the birth of Jade Autumn Lynn McNevan, born June 17th in Nashville, TN weighing 7 pounds, 14 ounces.

“She has tons of brown hair like her mom and a strong set of lungs like her daddy!” exclaims Trevor McNevan. “Mom’s doing awesome.”

After taking time to enjoy his growing family that includes three-year-old son Cohen, McNevan, along with TFK bassist Joel Bruyere and drummer Steve Augustine, will take their fan favorites and the new arena-shaking anthems of EXHALE on the road to see their extended family of fans coast-to-coast.

With EXHALE, TFK are back to the aggressive side of the dial. The album released independently worldwide on TFK Music. Available at iTunes, Amazon.com, Best Buy and other digital and physical retailers internationally, the acclaimed new album is shaking stereo speakers, all the while being crafted to be fully experienced live.

EXHALE features the hit single, “Running With Giants,” and also includes riff rocker “Incomplete” and second chances-themed “Born Again” along with “Give Up The Ghost” and “A Different Kind Of Dynamite.”

“‘Lifeline’ is about a time in my life when I was feeling very overwhelmed, to the point of anxiety,” says McNevan in Revolver. “I felt like I was drowning in the waves of everything around me, and battling my own rational. The feeling of being alone in isolation wasn’t true, but it sure felt like it. And in that moment, the lyrics, I need it all this time, send me a lifeline, were the exact words I remember crying out for help.”

Nearly two years after Thousand Foot Krutch landed their second consecutive Hard Rock No. 1 and Billboard Top 10 album with OXYGEN: INHALE, EXHALE is proving to be the chart-topping, hard-hitting follow-up.

“I had gotten the idea a few years back of having an album called ‘Inhale’ showcasing the lighter, quieter side of the band that’s always been a part of our albums, allowing us the freedom to dig deeper into that than we have before. And then to have an album called EXHALE that drops the gloves and dives even deeper into the aggressive side of the band. We didn’t get soft on the last one! I promise!” laughs TFK front man Trevor McNevan. “It was always meant to be a two-part story.”

In the midst of the success of the new album from TFK, McNevan’s songwriting and vocal talent is also getting time on the “big screen” as he co-wrote and performed the end credits theme song for the movie, Teenage Mutant Ninja Turtles: Out of the Shadows.