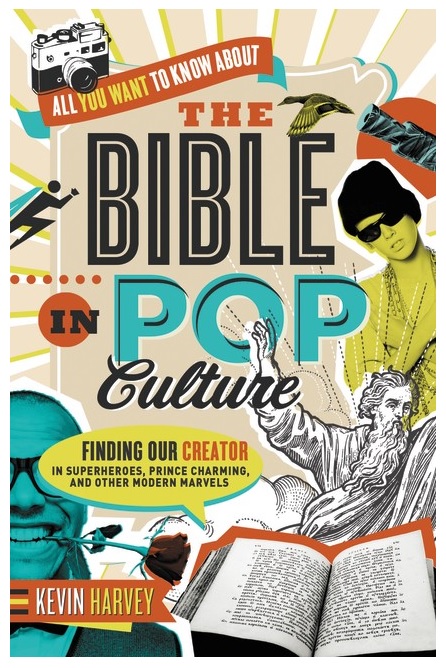 Publishing giant Thomas Nelson announced the March 24, 2015 release of Kevin Harvey’s upcoming book, All You Want to Know About the Bible In Pop Culture: Finding Our Creator In Superheroes, Prince Charming, and Other Modern Marvels.

When you look closely, past the outrageous outfits and the antics of teen pop-sensations, it’s easy to see that from the big screen to the small screen and right down to the radio waves, God and His stories are still prevalent in pop culture today. There are movies and television shows that speak eternal truth, reality show families who represent believers well, even fictional Christians portrayed in a positive light. And if you listen closely, musicians are still drawing their themes from God as the original songwriters of the Bible did. For readers who love pop culture, readers searching for meaning in media today, or those passionate for reaching around them for Christ, All You Want to Know About the Bible in Pop Culture is the perfect choice.

A casual and engaging resource that includes Bible-based facts and trivia questions, and examples of biblical messages from current TV shows, films, and pop songs while revealing places where readers may be surprised to find redeeming values and gospel messages in today’s movies, music, popular TV shows, and much more. “It is my hope that readers will enjoy reading this book as much as I did researching and writing it,” said author Kevin Harvey. “And that they will begin to recognize the numerous ways in which we can find elements of the Bible and gospel in today’s pop culture.”

Kathy Armistead, Ph.D., Associate Publisher, Study Resources at Thomas Nelson thinks that readers might be surprised as they read All You Want to Know About the Bible in Pop Culture. “The reason that we create books like this is to shows how God can use pop culture to reveal His truth while always basing our content on a strong biblical foundation – creating a thirst in all of us for His Word.”

About the Author:
Kevin Harvey has spent the last 12 years as an editor and writer in Christian publishing, but has spent much longer than that immersing himself in pop culture, especially during the summer movie season. He self-published his first book, Jonah, John, and the Second Greatest (but Most Avoided) Commandment, in 2010. Copies can be found on Amazon, as well as in his attic. Kevin and his wife, Amy, have two children and live in the small town of Wake Forest, North Carolina.