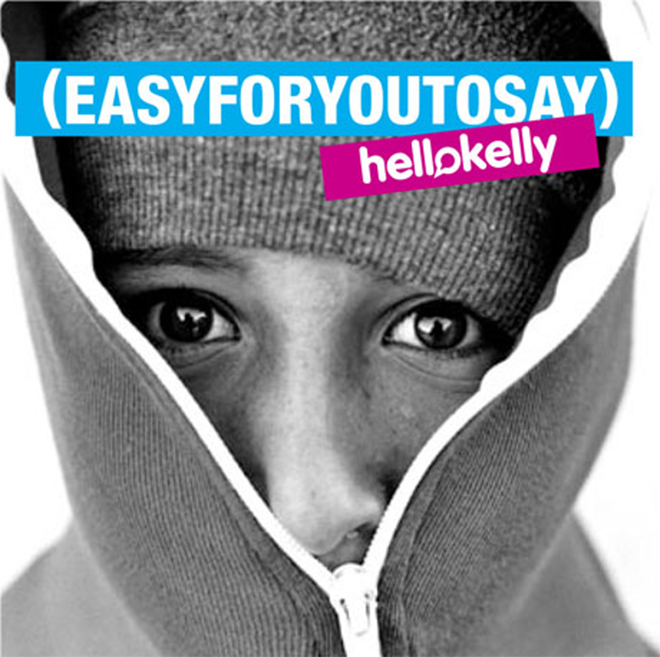 I’ve seen Hello Kelly perform a dozen times since their inception in 2004. The band has produced a profusion of EPs over those years. (EASYFORYOUTOSAY) is a welcome addition to any pop/rock aficionado’s collection.

Francois (Francy) Goudreault handles lead vocals and guitar for Hello Kelly. An unusual position for someone who has a strong stutter. While singing, there is no notice of this condition. Francy provides clear and perfectly enunciated vocals. The listener never has to strain to capture the lyrics of a Hello Kelly song. The balance of HK members are all new, Travis Wilbourn on guitar, bassist George Wong, and  drummer Ben Mahaffey. Originally from Orangeville, ON the band now calls Nashville home.

Track nine was a previous hit for HK, “The Communication Breakdown”. This is a re-recording from their Green Things Grow EP of 2007. “Your Name in Vain” contains the only clear Christian message. Praying that each word from the songwriter’s will reveal Christ’s Word.

Francois gave a synopsis of what has occured with HK since their last CD Hello Kelly in 2008:

“At the end of Summer 2009, all the guys that were in Hello Kelly decided to go off to school. I was so happy for them to be taking on new adventures but it put me in an interesting position. I didn’t feel ready to say goodbye to the band and you guys, so I moved to Nashville, TN! Why? Because I’d made a bunch of musical friends in Nashville over the years and it seemed like the best place to take a crazy risk!

I recorded a new record and called it “Easy for You to Say”. I felt like it was finally time to say some things, through song, that I’ve never been able to say to anybody face to face. I’m more proud of it than anything I’ve ever done.

I put together a new group of guys in Nashville: Ben, George and Travis – and we’ve all become like brothers. I can’t wait for you to meet them on the road and in YouTube videos and stuff like that. Each of our personalities is a perfect match to a different Teenage Mutant Ninja Turtle. It’s pretty awesome. (I’m Leonardo, apparently!)

So our plan was to start playing shows, release the new record for you guys to hear, hang out and maybe even find a way to pay the bills along the way.

See, Nashville’s a great city but it’s also weird because there’s so much music business going on here every day. A couple people told us that we’re really good, and CHA-CHING! We got big dollar signs in our eyes and we got kinda distracted.

Instead of just releasing the record for you guys, we started trying to figure out how it could make us the most money. How we could be as huge as we possibly could. Like, sure, a big part of being in a band is trying to find opportunities and success but…

Eventually it reached a breaking point. I got so confused about everything that I didn’t even know why I was in the band anymore. But my fellow Ninja Turtles helped me to remember that the band’s not about us. It’s about you guys! So…

On June 14th, 2011, we’re (finally) going to release (EASYFORYOUTOSAY) on 7 Spin Music, the indie label that signed us back in 2006. We’re so excited about this record and we really hope that you’re still excited too!”

This band is/was huge in Ontario. Hello Kelly is first and foremost a live band, unfortunately the studio releases, while excellent, have failed to capture the rawness, power and attitude that is seen in both their stage performances and independent EPs. What (EASYFORYOUTOSAY) does achieve is to capture Hello Kelly’s bright hooks and catchy lyrics. Hopefully both the new band members and new CD will gather new fans into the fold and bring Hello Kelly the acclaim they richly deserve.