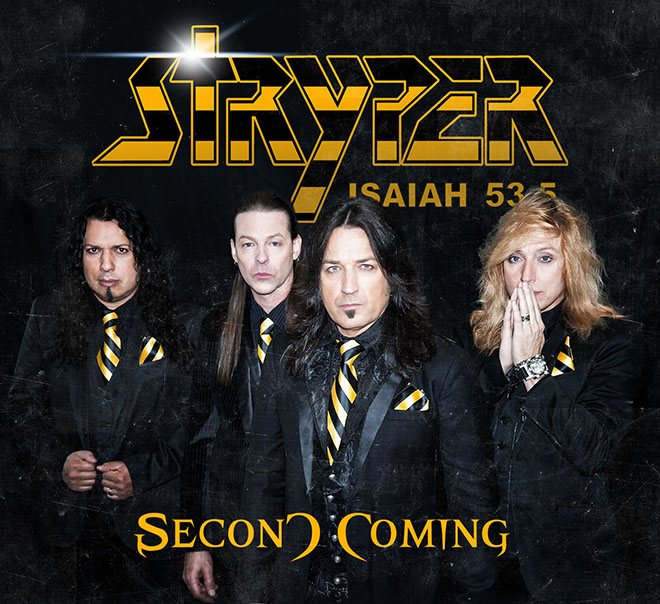 Old-timers may remember the days of K-tel records. These compilation albums featured up to 20 heavily edited songs squeezed onto a single 45 minute LP. Years later music fans purchased compilation CD’s with songs by “the original artists” in discount stores. The CD covers neglectfully failed to mention that they were, in fact, poor renditions recorded decades after the originals.

On March 26th, Stryper releases Second Coming, on Frontiers, with a series of re-recordings of fourteen of their older hits and two new songs, “Bleeding From The Inside Out” and “Blackened”.

Second Coming follows on the heels of a series of albums released by Stryper in the past decade. In 2005 they released an embarrassingly poor reunion album, Reborn. During 2009 Stryper redeemed themselves with what may have been their greatest release, Murder By Pride, followed in 2011, by the interesting, The Covering, which found Stryper recording covers of some of the bands who musically influenced their sound.

Is Second Coming anything like those K-tel records or compilation CD’s? Absolutely not. The only similarity is the term “original artist”. After almost 30 years together, the musicianship of Stryper is superior to their early days. Vocalist Michael Sweet still hits the high notes even though he is fast approaching the half-century mark. Robert Sweet pulls out all the stops, as he nails the drumming and flaunts his technical prowess. Oz Fox, known for his legendary guitar skills, brings his abilities to an all new level. Tim Gaines leaves nothing to the imagination with his bass.

I met with Michael Sweet of Stryper recently and asked about the reason for re-recording these classics:

We did this for ourselves; we didn’t do it for the fans. We set out to re-record these songs because we wanted to own the masters. We have a label that owns the catalogue, which is Disney/Hollywood. We signed a publishing deal with Songspub and, you know, the middle man is Disney. So, whenever Songspub pitches a song for a movie or television, they gotta get approval from Disney. Most of the time that’s a very difficult task.  They don’t return calls, or if they do, they want more money, or if they don’t want more money, they want this or that. A lot of times it makes the deal go south. So we grew tired of that and said ‘OK we’re going to re-record these songs and then there will be no middleman, ‘cause we’ll own the masters’.  And that’s what we did.

That quote is only part of the picture painted by Stryper on Second Coming. The quality of the new recordings, tweaking some of the inconsistencies and improving the continuity found on the original recordings, has breathed new life into these metal classics. The greatest change is the incredible energy, equivalent to what fans would hear when seeing Stryper live.

While the albums Reborn and Murder by Pride gave a more updated metal sound, the two new tracks found on Second Coming are reminiscent of the early days of Stryper and mesh with the classics. “Bleeding From The Inside Out” has already been sent to radio. Unquestionably it is “radio friendly” with an approachable metal vibe that even the non-metal masses will catchy. It’s  “Blackened” that has grabbed my attention with it’s a rawer, harder edge.

Stryper’s music became famous with both Christian and non-Christian audiences alike. A band that was both reviled by Christian conservatives and adored by those who recognized a new way of expounding Christian faith in music. All of this delivered by an amazing musical talent. The days of yellow and black striped spandex suits may be gone forever, but the new and old  music of Stryper, found on Second Coming, will continue to delight for decades to come.

Check out the teaser video for Second Coming below.