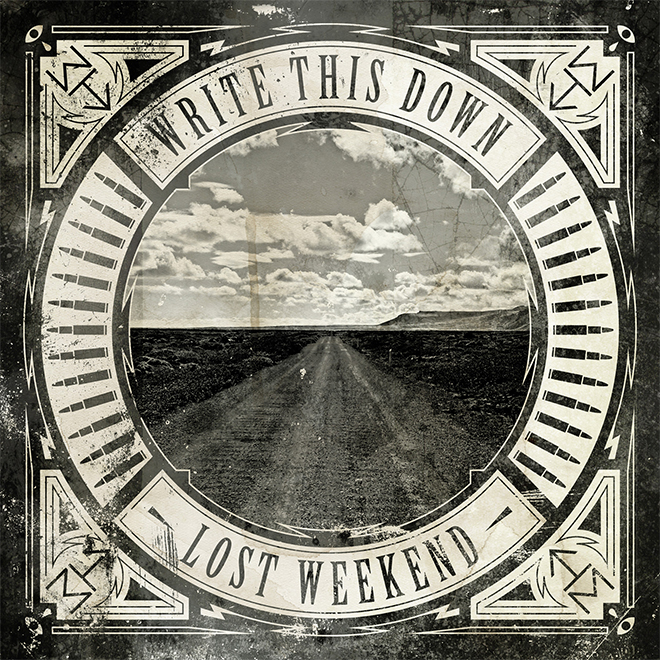 Write This Down not only sang these lyrics from “The Older I Get, The Better I Was”, but they seemed to heed their own words on their delivery of Lost Weekend.

Not only did Write This Down find success with their initial studio album, but they’ve been honing their craft on the road with bands like Blindside, Project 86, Disciple, and The Letter Black.  They’ve focused their style, upped their artistic ante, and have evolved their song writing style along the way.

Write This Down had the daunting task of trying to top the success of their 2010 self-titled debut album. For their sophomore release, Lost Weekend, this Tooth and Nail band has more than achieved that desire.

Hailing from Minneapolis, Johnny Collier (vocals), Chad Nichols (drums), Nate Rockwell (guitar) and Nick Lombardo (bass) have changed the dynamic output of the band on their upcoming, June 5, 2012 release, Lost Weekend. To explain the change in sound between their first and second albums, Write This Down’s Johnny Coliier had this to say:

The first disc was just all over the map and we were still trying to find our identity.

Write This Down has recognized their strengths and are pushing them to a whole new level. The awesome juxtaposition of the gritty vocals of Johnny Collier, with the clean vocals by Nate Rockwell, have been defined and brought to the forefront on Lost Weekend. While the pop rock influenced songs from their debut album are gone, Write This Down continues to put down a fairly diverse set on the new Lost Weekend album. Those raw and gritty vocals are carried over into the lyrical content of Lost Weekend. Many of the songs are set in the valleys we experience in our lives, not on the mountaintop successes.

Here’s a song by song breakdown of Lost Weekend.On the opening track from Lost Weekend, the band pulls out all the stops on “The Older I Get, The Better I Was” with the song almost verging into the realm of hardcore. The band seems to be unburdening themselves in their lyrics:

God forbid that we bring offense when you read our sins in the album print
And honestly, this honesty has been killing me
I am your tired and burdened
Chasing, chasing your heaven
We’re clinically defective at the worst times
With our twisted up convictions and destructive night walking
We’re the drifters and the dreamers, forgive us
Mad dogs fury, raging on, with glory.

“See Ya Never” is the road song that every band wants to write, but not usually with this much honesty.

It’s a good life living on the road
Our die hard looks and vagrant souls
Breaking the patterns, killing the routines that I find at home
These are the highlights
Casinos in Reno
Surfing in Long beach
Castles and basements

I can’t get past the similarity between Hawk Nelson’s party song “Bring ‘Em Out” and Write This Down’s  “I’ll Make You Famous” to really enjoy this track. Nonetheless, it remains a fun song.

Show time, the party scene is filing in looking for a hideaway from all the deadbeat clones.
And I know how every single night goes crash out on the balcony tearing up the front lawn.
And it’s a bore it’s a rerun I’ve seen before every weekend and they’re scraping from the bottom of the barrel for a new improved original that no one’s heard before.

“Red 7” delivers the only overt Christian lyrics on Lost Weekend, but picks up the slot as probably the weakest song on the album.

“Crash and Burn” is slated to be the first single from Lost Weekend and deservedly so. Hard rock rules both musically and lyrically on this track. The song opens with a heavy guitar riff and draws upon both Johnny and Nate’s vocals. Lyrically, the band describes the trials of being in a band, the distractions, setbacks, and upsets that take away the passion of the artist.

So take a moment, just to think about how it works
And how I tried to change the outlook
Cause it went from being a band, to a business plan
And I already know that I screwed up the fast track
Broken alone and miles from home
So we drove through the night because we had to survive on what our parents gave us
I crash and burn
Just like I always do
I live and learn the truth
I gotta get back to things that I once loved

Write This Down pulled out the stops on their cover of “Don’t Speak”, the Grammy nominated song by the power pop band, No Doubt. I had my own doubts as to how they would interpret the song, but those doubts were dumped when the band brought the song from the pretty pop stylings and added their own rock touch. This track is more than an improvement on the original No Doubt song.

“Cheap Affairs” is undoubtedly the prettiest musical piece on the album and lyrically one of the most depressing. The tale has been told before of relational unfaithfulness, but rarely as frank as this.

700 IOU’s
Holidays and birthdays too
I’ve missed them all, I’ve missed them all
Failed attempts at rendezvous,
This is just a dying cause
But we talked it out and made a truce
Judging by the look on your face, you don’t get it
Like every word I said was abandoned grace
Staring at me like you’re amazed my bad habits are holding me up and away from you

Track 8, “Florida Rage” carries on with the same theme, but back into the heavier rock vibe and a Blindside influence to this song.

We’ve seen this coming for months
Feel the shock as I walk
Rejoicing in what I’ve lost
Stay away, stay away
Keep you in my darker days
Calm your nerves, with a prayer
A cycle I can’t repair

The title track, “Lost Weekend”, is one of the catchiest songs I’ve heard in a long time. The chorus is going to have you singing along (so long as you aren’t embarrassed by stares of neighboring drivers).

We are the dirty, rotten, cheap and confused
Caught in a lost weekend, a lost weekend
Holy rollers and jokers, fantasy’s over
So return as prodigals

The vocal interplay between Nate and Johnny is perfected on “Touch and Go”. These two vocalists show every band in the music industry how the combination of raw and refined vocals can take a rock song to a whole new level. This song may well be on everyone’s favourites list for a long, long time.

Write This Down tip their hat to their home state on the ballad “Minnesota Interlude”.

It’s another iced kind of day
Minnesota’s gonna freeze my dreams away.
Sittin’ on the freeway wondering if I’m ever gonna get back.
Taking one step through the door,
The tension’s gonna rip our skin and bones apart.
Lookin’ for a fast fight stirring up the dead of winter

Lost Weekend ends with a strong finish on the light rock track “Song and Dance”. Yet again, the lyrics display the trials we find in our lives.

No one knew it, but midnights on Lake Street were constant concepts with backwards progress
But it never failed, we showed up on Sunday morning
Feeling nervous, and hopeless and stranded
With double standards like nothing mattered
Like we had enough and there is salvation in the silence

The Lost Weekend album by Write This Down breaks out of the Tooth and Nail vault on June 5, 2012. Grab the album, crank it up in the car, crack the plaster in your house, and scare your neighbors with the sound emanating from your speakers. One guarantee is that you will have this album playing again and again.