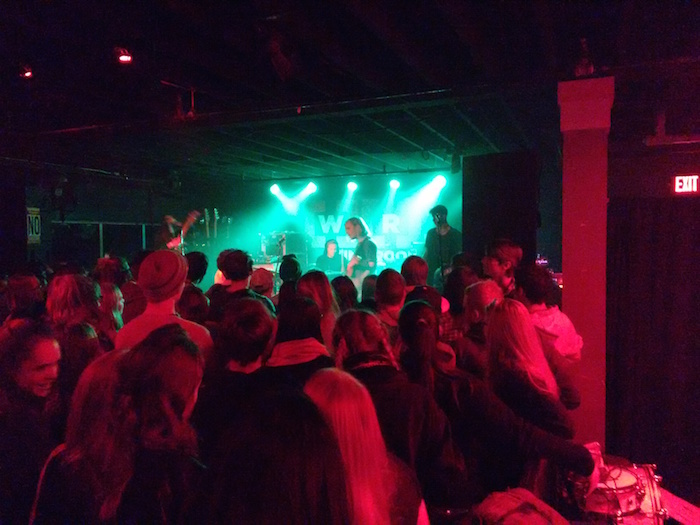 A cool fall day was perfect for heading to Buffalo for a show, even though it meant I would have to miss the Grey Cup game. I was also greeted by a very long lineup. The show was sold out, so the long wait outside the doors was no surprise.

The early arrivals at this capacity event had already grabbed their spot on the floor. No way to squeeze through the crowd to grab any band photos. I had settle for a spot at the rear of the venue, allowing only rare glimpses of the artists. Alas, this is one of the curses of being height impaired.

Cardboard Kids opened the show. I was expecting to see the patrons bouncing off the walls with the band’s energetic rock music, but the crowd was laid back and simply enjoying the tunes. Considering Cardboard Kids are relatively new, they did have a large number of people singing along with the band.

I’d only checked into the music of Run River North just hours before heading out for the show. Previously known as Monsters Call Home, the six member band are Korean-American, whose original music reflected influences their parents cultural background. Though labelled as indie folk/rock, Run River North heads more into the rock/post rock realm during their live set. Their music really grabbed me with it’s depth of sound.

This was my first chance to see the headliner, Relient K in action, which is surprising considering the number of artists I see each year. Admittedly, I had low expectations as I waited for the band to appear on stage. That may sound harsh, but I had considered the days of Relient K to be over. I was wrong. It was a really entertaining set. It’s interesting how Matt Thiessen’s voice has remained the same, the only change to his boyish looks is the hair, being even more unruly than during the early days of the band.

Cover songs from over the past decade and a half, including obvious crowd (and my personal favourites), “High of 75” and “Be My Escape”. The band also included a couple of newer songs include the very new “Marigold”. Before the new song, Thiessen said from the stage, “Don’t you hate when a band plays a new song? You don’t know the words and can’t sing along”. I think the crowd agreed as they gave a very limited reaction to the song.

The crowd was one of the most diverse I’ve ever seen. The gray haired set mingled with the teens and twenty-somethings, young kids, and everything in between were all there. I was amused to see two jocks, (you know the type, 6 1/2 feet tall, muscles stacked on muscles), doing the guy hug thing, singing along loudly as tears trickled down their cheeks. I wasn’t expecting that.

Thiessen gave a lot of stage banter. He told the audience how he was born in the Fort Erie hospital on the Canadian side of the Niagara River, just a few minute drive from the venue. He berated the crowd for not paying attention to the Grey Cup game. He also made known that his father was also in attendance, making this the equivalent of a home-town show.

Relient K’s encore song choices came as surprise. Christmas is coming, so the band elected to finish with some of their favourite holiday tunes. “Have Yourself a Merry Little Christmas” had the crowd singing once again, but it was the participation on “O Holy Night” that was awe inspiring. Without exception, everyone joined in, and with great sounding voices. It was like being in the middle of  one of those flash mob Christmas choir videos you see at this time of year.

A polite crowd, a great venue, and superb music. No one could have ask for more.