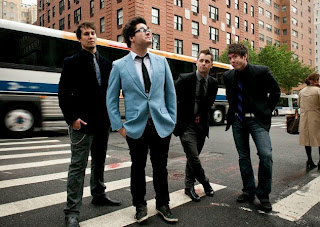 Sad new from Orangeville, ON/Nashville, TN based Hello Kelly. Lead vocalist, Francy, had this to say on their website:

Hello Kelly is, for lack of a more elegant phrase, “closing up shop.” This wasn’t a quick or easy decision; we came to it with lots of struggle, resistance and sadness. I – Francy, the singer – wanted to write this letter for those who wanted a more in-depth, heartfelt and no-BS explanation. You deserve it!

I started Hello Kelly in 2004, when I was 19, recording the first EP when I should have been studying. I remember within the first year, we were ordering a new batch of EPs every couple months because they were selling so fast. We’d play shows all over Southern & Central Ontario and see kids singing along – songs like Paper Bag Princess, The Perfect Place and Favourite Arcade. It was awesome.

By the time 2006 rolled around, we started having frequent member changes. This was mostly because not many people can live in the underpaid limbo between part-time musician and full-time musician forever. Can’t blame them! Some got jobs, others got married. Hello Kelly soldiered on.

In 2007, the thriving indie scene that we’d come up in was starting to dissolve; most of the bands we’d toured with for years were starting to break up. It was a mix of relentless perseverance and blind stubbornness that kept us going. We developed the reputation of a band that “you need to see live” and starting playing some bigger festivals & conferences. On a trip to Nashville, TN, we met with a record label and started a new chapter – one we hoped would bring new opportunities.

We released our first LP on that indie label in 2008. We made some beautiful memories in the 2 years spent touring and promoting that project. Unfortunately, that was about the time that the shifts and changes in the music industry really began to manifest, and we found ourselves committed to an old-school agreement in a new world. Good people, good intentions. Bad timing.

It was about that time that everybody in the line-up quit, and I decided to make a big, bold change – I moved to Nashville, TN to start work on Hello Kelly’s 2nd LP. I “rebooted” the band and started making my big, bulletproof plans to take over the USA! (Please, note the sarcasm!)

But working with the new line-up in Nashville – Ben & Travis – something unexpected happened: For the first time, I felt like I was part of a collaborative, cohesive & adventurous project. It was a subtle difference, but it was intoxicating.

We released the 2nd album in 2011 and toured it for a year. The scenery was different. We played bars and clubs, no more big conferences. It was a fun challenge having to learn how to win over a different kind of crowd. Through all this touring though, something was happening. We couldn’t put our finger on it, but every show started to feel less and less like Hello Kelly, more and more like … something else.

Confused and a little overwhelmed, we talked to a friend who had contributed to our Kickstarter campaign. We told him where the band was at and he said, “Look, we just want to hear you guys keep making music. Change whatever you need to, take however much time you need – we’ll all be waiting.”

Closing this chapter is about putting away old mindsets. It’s about feeling the freedom of a new beginning, a clear horizon – we think the music will be better for it! The hardest part about all thisis that we don’t really know what’s next or even what it will look like! There’s one thing we do know though – we’re not done creating! And we think that’s exciting.

Some of you probably discovered our music by seeing us play at a church or hearing us on Christian radio. As we get older and chase authenticity, some of the things we’re writing about are no longer strictly G-rated – and we want to be up-front about that. Does that mean we’re no longer pursuing the Lord? If anything, we’re pursuing Him more. His guidance played a huge part in this transition and we’re waiting on Him daily for direction and clarity. Once our upcoming record is released, we’ll have fulfilled our record deal. Whatever the future holds, we’re moving forward with sure feet and renewed purpose.

Some of you might think Hello Kelly is closing up shop because we never reached the level of success we wanted. Sure, there was a season when I got a little obsessed with being famous, but I’m so glad I found freedom from that because now I see that it’s a mountain with no summit. The best advice I can give anybody who’s “trying to make it” is to relax & enjoy yourself. If you’re forcing it, you’re doing it wrong.

It has been an incredible 9-year ride and I’m so, so thankful for all the friendships we’ve built with all of you. The support you’ve given us over the years – not to mention the patience you’ve shown us through the tough times – has been incredible. I’m grateful to all of the guys I’ve shared the stage with over the years, all the memories we shared. Ben and Travis especially …

So it’s with a heavy heart and a sly little smirk that I say “Goodbye Kelly” for the first time. It’s a first-time feeling that I won’t soon forget, but the future is bright!

Listen to the Nov 16, 2011 broadcast of The Antidote with Hello Kelly