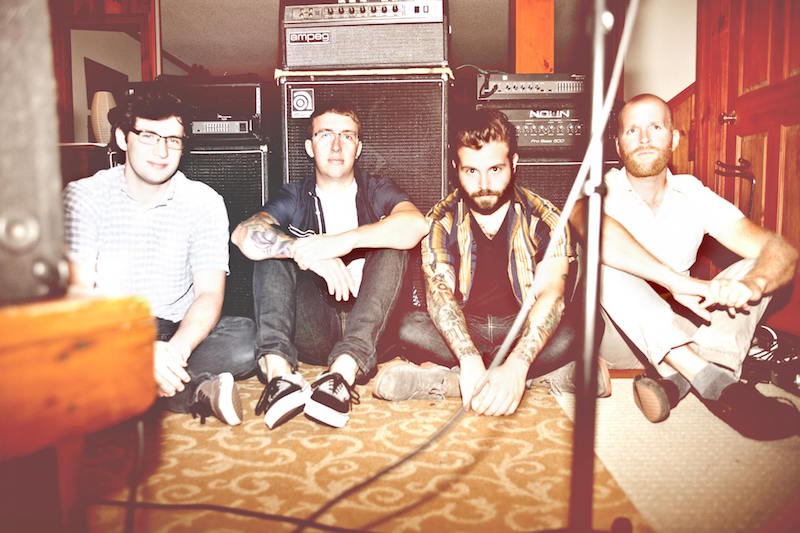 Over the past year, North Carolina’s heralded progressive alternative band Unifier has been gutted in many ways.

“Our new EP is about reinvention, both as individuals and a band, and we wanted the title Gutted to reflect that — but with the bleak connotation in which we experienced it,” says singer/guitarist Aslan Freeman. In the tradition of great modern alternative noisemakers like Brand New, Jimmy Eat World, and Foo Fighters, Unifier has spent the last several years releasing and performing a steady stream of gorgeously driving pop rock records (Colorado, Oh Great City EP, B_sides: Volumes 01-03). While momentum has reached an all-time high, the band has continually pushed to refine their sound and rediscover what drives them as artists, both individually and as a collective whole.

“Essentially, we’ve been in the process of rebranding our band, and Gutted is a big part of that,” says Luke Rayson. “We’re gradually moving in a heavier, darker, and more openly creative direction.”

What the band’s debut album Colorado achieved in terms of “big” and “pretty” aesthetics, Gutted matches with newfound elements of rawness and aggression. Conceptually, the EP wanders into both familiar and darker domains, examining recurring feelings of loss, helplessness, doubt, and judgment through a variety of narrative lenses.

“We wanted the tone of this EP to be a bit of a departure from what we’ve tried to accomplish with our previous releases, without sounding lo-fi or unpleasantly jarring at any point,” says Aslan. “We wanted the overall production to still be polished, but with the individual elements remaining more ‘alive in the room.’”

While drenched in darker, more experimental tones and moody thematic content, “alive” may actually be the most accurate adjective to describe Gutted. After repeat listens, the new voice of the band grows stronger and more familiar — a recalibrated and more powerful version of a model that was already working.

“Gutted is a bit of a segue between where we’ve been and where we are heading as a band,” says drummer Mike Kane. “We’re treating it as a sort of a sounding board for peoples’ reactions.”

As with any evolution, each stage of output represents a step down a longer path. With Gutted, Unifier is discovering their true north; a creative foundation which countless iterations can be built upon. Gutted marks the beginning of a new era for Unifier – a period of growth through refinement; of progress through focus.

Find the new EP at digital retailers March 24th and visit spartanrecords.com for more information about Unifier and the Gutted EP.

Wednesday December 8, 9pm EST:
Saturday December 11, 10pm PST:
Many artists struggle to release a debut album, but 20 years? That’s the case with Arizona natives, Namesake. The band was well known regionally in the late ’90’s and early 2000’s. Now they’ve reunited and produced the aptly titled, The Twenty Year First Impression. Come hear the complete story from bandmates, Matt Aragon and Eric Epps.
Wednesday December 15, 9pm EST:
Saturday December 18, 10pm PST:
What’s the climate like in Virginia Beach? It’s Red Weather. This indie/emo/punk four piece have rejuvenated music styles from the past and made them their own. The band brings an intensley sad tone to their new full length, Wish You Well. The album is filled with songs of relationships that have gone sour, but is there light at the end of the tunnel? Find out, when the band members of Red Weather visit The Antidote.
Wednesday December 22, 9pm EST:
Saturday December 25, 10pm PST:
The world knows that Santa lives in Canada’s north and since we’re on the doorstep of Christmas, The Antidote brings a Canadian slant to our Christmas playlist. From worshipful, to unusual, to novel, to fun. Ok, so maybe it won’t be entirely Canadian, but it’ll be pretty close. Join us for a night of Christmas spirit focused on Christ.
Wednesday December 29, 9pm EST:
Saturday January 1, 10pm PST:
2020 ended up being a year filled with bands recording cover songs, very little that was entirely new or memorable. The easing of COVID restrictions opened up the floodgates for creativity in 2021. Come hear the best of the year when The Antidote shares it’s top 10 list for the year.