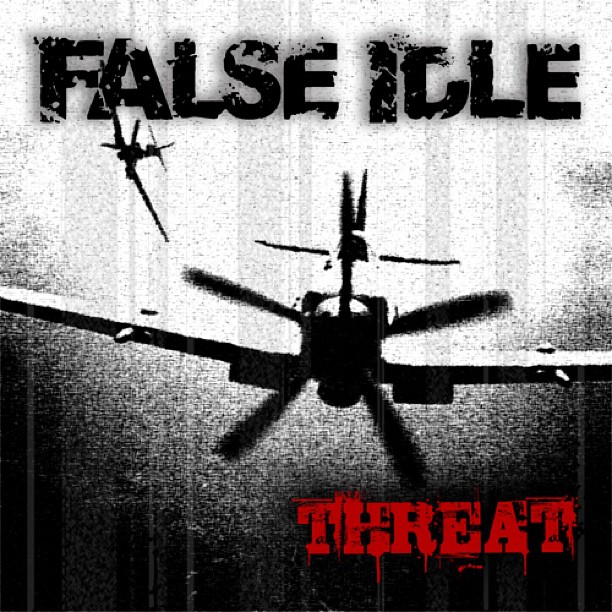 After two awesome EP’s, 2010’s Hymns of Punk Rock Praise and I Refuse in 2011, False Idle has released their first full length album Threat. Based out of Boise, Idaho the False Idle dynamo is comprised of Sef Idle (vocals, guitar), Tyler Lewis (guitar, vocals), Seth Warren (bass, vocals), and Philip Harris (drums). For dedicated punk fans, two of those names stand out. Sef Idle teamed up with his fellow uniSEF bandmate and guitarist, Tyler Lewis, and combined with Seth and Warren, False Idle has pumped out what may be the greatest punk release of 2013.

On Threat, False Idle has taken to heart the old punk axiom of delivering a revolutionary and contrary message to an apathetic world. This determined stance is designed to shake the complacency found in our society. Issues such as greed, the corruption of politics and media, and the more personal and poignant issues in family. But there’s nothing like unity, brotherhood, and ineffable hope to demolish the ugliness in society.  Front-man Sef Idle digs deep on his 15 plus years of punk music to deliver an in-your-face challenge to live for more.

“We all have a pretty diverse taste in music and I think it reflects well in the writing. We tried to challenge ourselves and think a little outside of the “normal” punk sound, while still making a great punk record. In the end, I would say we accomplished just that, staying true to our sound but being able to branch out and give new things a try.”

False Idle accomplished those musical goals on “On Tomorrow”, “A Tension”, and “Façade”, but the band has given much more. Lyrically the False idle has given hope to the hopeless and strives to have us to change our moral and obligational views. “New Brand of Revolution” summarizes this view;

How many times has it come to pass that a revolution just didn’t last, the fight was fought, and the battle seemed won, but the result expected was left undone, you did your best and put up a good fight, hoped the result would be right, but in the end you came to see that nothing had change. Put down the violence and the hate, I hope this hasn’t come too late, you’ve got to make your choice, it’s time that we start a new brand of revolution. This answer is a simple one, offer up a helping hand, feed the hungry and clothe the poor, a smile and an open door. A picket sign won’t change the world…

The thoughts that False Idle present have been said before, but none have stated as succinctly, forcibly, and eloquently as found on Threat. A pounding pleasure to our ears and a wake-up call to our souls.

Find the Threat  CD at the False Idle store or download it at iTunes.

For a taste of what to expect on Threat, check out False Idle’s video for “On Tomorrow”: