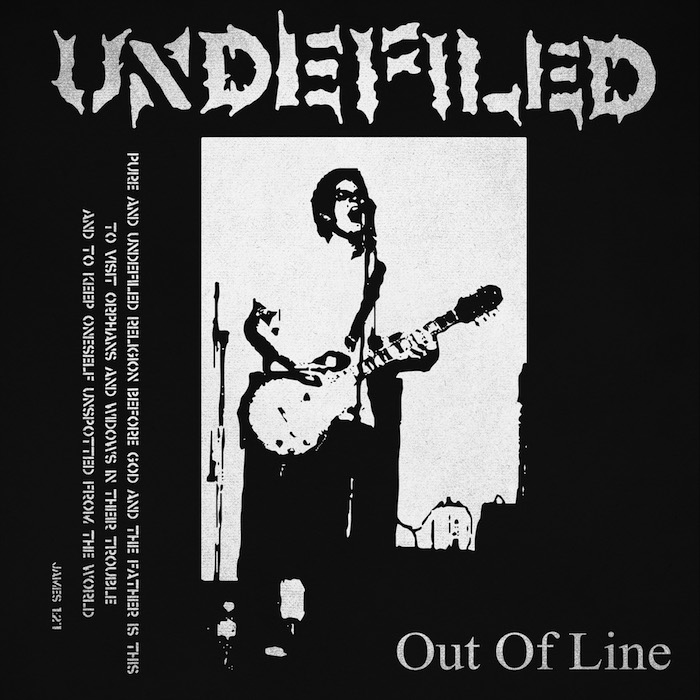 Pure religion and undefiled before God and the Father is this, To visit the fatherless and widows in their affliction, and to keep himself unspotted from the world. – James 1:27

Rising out of the ashes, one of Christiandom’s early punk efforts is finding new life through Resurrected Vinyl. Out Of Line was originally recorded by the Christian punk band, Undefiled, at Calvary Chapel, Lake Elsinore, California, in 1998. The original tapes of the band’s solitary demo were discovered gathering dust, making for an easy decision to bring them back to life. These rough hewn gems were sent to producer Sef Idle (False Idle) for mixing and mastering, giving the songs a crisp and dynamic sound. Four tracks were drawn from the collection of demos, and are now available on both 7″ and mp3.

Undefiled frontman, Mike Griffith delivers his vocals with the ferocity of a chainsaw that’s sucking nitro. Solid guitar work, a dominant bass, and rapid fire drum kit from Paul Remund, gather together for a brutally real sound. Even with its newly polished production Out Of Line retains its raw and gritty grasp of Christian faith existing in a troubled world.

Hear the sounds of gunshots – the agony of pain.
I stare at the sky to see if God’s waiting there for me – I’m sure He is but…
Is it my time to leave this world of confusion – corrupting youth making us lust.
Spiritual abuse is making us avoid God why can’t we… ignore the world outside?
But – it’s no use; see the world – each day inflicted by abuse.
The end is coming soon — sure it won’t last that long.  – “Coming To Pass”

A decade and a half since it originally surfaced, Out Of Line, still conveys a harshly relevant message to our lives and faith.