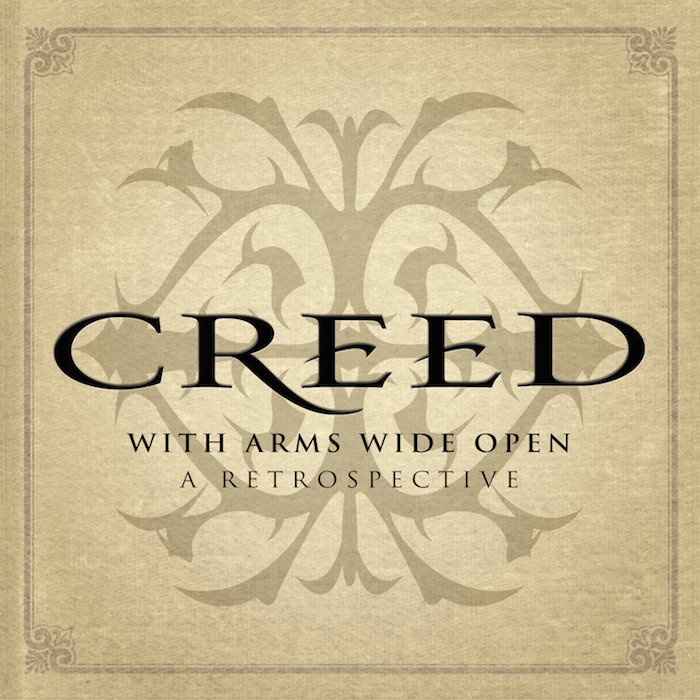 An all-new Creed compilation entitled With Arms Wide Open: A Retrospective released November 20, 2015. The three-CD 40-song set features the radio singles from all four of Creed’s studio albums and collects all the band’s soundtrack hits, rarities, live and studio acoustic versions in addition to three previously unavailable demos. The CD configuration for With Arms Wide Open: A Retrospective will be available only through Wal-mart.

With Arms Wide Open: A Retrospective’s Disc One covers the 16 radio singles — all written by Mark Tremonti and Scott Stapp — that launched Creed into the stratosphere as one of the best-selling rock bands of all time. Included are radio edits and other versions. Disc Two officially collects for the first time on one disc all the soundtrack hits, including rare Doors covers and three never-before-released demos, “Why”, “Blistered” and “More Than This”. Creed’s true legacy is their powerful live show, which they’ve performed for millions of fans all over the world. Disc Three of With Arms Wide Open: A Retrospective includes a selection of the available studio and newly re-mastered live acoustic versions of their biggest hits.

With 40 million records sold worldwide, a highlight of the band’s many accolades is an RIAA Diamond certification signifying 10 millions records sold for Human Clay, which continues to remain one of the top 10 best-selling albums in the United States since Nielsen Soundscan tracking began in 1991. Creed won a Grammy Award for Best Rock Song for “With Arms Wide Open” and in 2000 would become the first band in history to chart seven consecutive #1 rock radio singles.

Creed is Scott Stapp, Mark Tremonti, Scott Phillips and Brian Marshall. The band members remain active, with Mark Tremonti touring for his new solo album Cauterize and Scott Stapp set to resume his Proof of Life tour as well as Scott and his wife Jaclyn appearing on Vh1’s Couples Therapy.

01 To Whom It May Concern

08 Riders on the Storm

02 My Own Prison [Acoustic Version – Extended]

07 My Own Prison [Live Acoustic]

13 To Whom It May Concern [Live Acoustic]