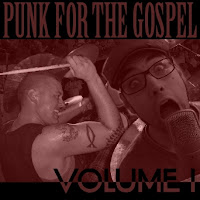 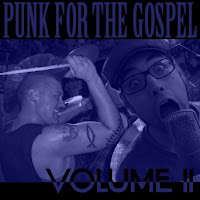 Thumper Punk Records and Caustic Fallout are pleased to announce the release of the Punk for The Gospel Benefit Compilation, a two volume compilation featuring songs donated by 42 bands to raise money to support the work of foreign Missionaries from within the Christian punk community. Missionary families that will be supported by this compilation are those of Dave Emmerson of The Old-timers and Aaron “Liberty” Wells of True Liberty. Of the 42 songs, there are 19 new or previously unreleased songs, including the first song released by The Deal in 8 years, a live recording of an unreleased song from Call to Glory, and new recordings by False Idle and The WAY, among many others.

The Emmerson family was originally based in Shotts, Scotland, United Kingdom, where Dave was involved in the punk scene doing promotions and played in the band Dragged Out. In September 2009, Dave and Vicki Emmerson answered God’s call to missionary work, and moved to Paarl, Western Cape, South Africa. The Emmerson family has been involved with various outreach ministries including programs at the Bergendal Primary School and Allandale Prison, as well as establishing a local chapter of Christian Skaters International. The entire family is also involved with Calvary Chapel Paarl Valley. Dave is the lead singer for The Old-timers.

The Wells family first became active in ministry in 2005 leading young adult ministries in their church. In 2008, Aaron and Bonnie Wells were called to be part of a church plant in Virginia. They served there for 3 years on the worship team and leading and coordination small group Bible studies. In 2009, they felt God call them to Missions. In January 2012, Aaron and Bonnie spent a few weeks there at El Jardin Segrado in the Orosi Valley of Costa Rica, doing medical clinics, seeing over 2,000 patients and sharing the gospel with them and ministering to the children. The Wells family is now serving at another new church plant in Virginia, and is raising funds to return to Costa Rica as full-time Missionaries in January 2013. Aaron is the drummer for True Liberty.

Volumes 1 and 2 are available for purchase in CD format from the Thumper Punk Records webstore, and digital versions are available through iTunes, AmazonMP3 and the usual suspects. All praise and glory to Him.