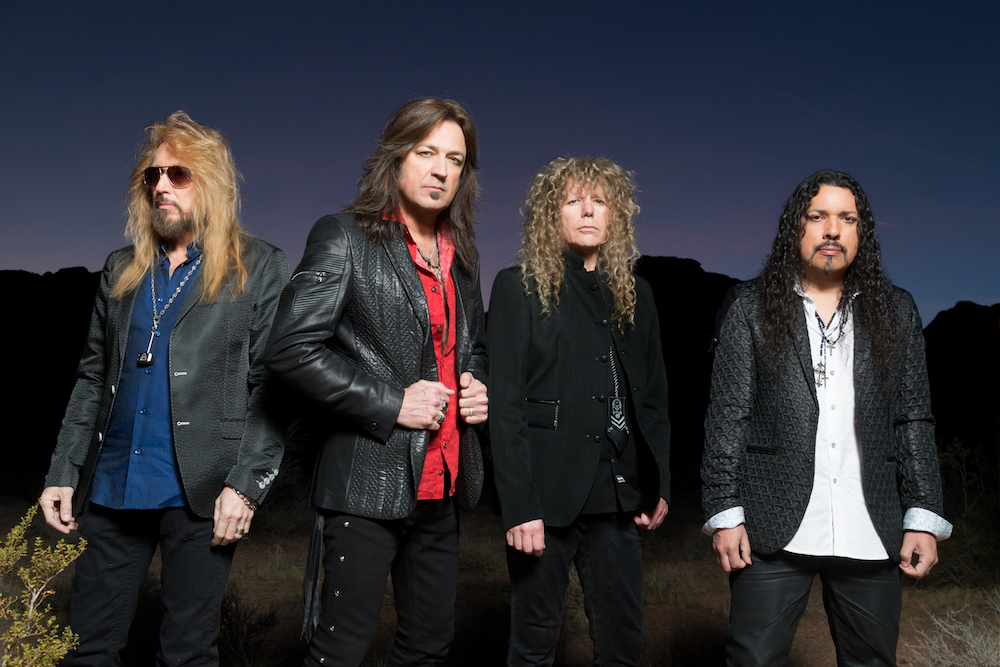 Iconic rock band STRYPER will celebrate their 35th anniversary with the upcoming release of their 10th studio album, God Damn Evil, due April 20, 2018 from Frontiers Music SRL. Produced by frontman Michael Sweet, the band returns by doubling down on the hard rock/heavy metal sound that earned them a worldwide fan base.

“We thought long and hard about this title,” says Michael in response to thousands of fan comments. “It was actually considered quite a few years ago and it just didn’t feel like the right time. Now, with all the evil in the world that we see around us on a daily basis, it made perfect sense. It’s a very bold statement yet a prayer asking God to damn/condemn evil. Nothing more, nothing less.”

STRYPER fans are getting their first look into the upcoming album with today’s release of the epic lyric video for the song, “Take It To The Cross.”

“’Take It To The Cross’ is our answer to many fans asking us to do something a little heavier and even bordering on thrash,” says Michael. “The verses are heavy with a vocal and lyric delivery that’s bold and relevant yet the chorus kicks in with a fast, thrashy vibe. We brought in Matt Blanchard (Act of Defiance / Shadows Fall) to handle the vocal growl on the choruses and the end vamp. This song is 100% high octane.”

“Take It To The Cross” can be streamed at Spotify, Apple Music, Deezer, etc. Those links available HERE: http://radi.al/GodDamnEvil.

Rocking since 1984, STRYPER is responsible for such classic ’80s metal albums as Soldiers Under Command, To Hell with the Devil and In God We Trust.  After a sabbatical for much of the 1990’s, STRYPER returned strong in the early 21st century. To date, the Dove Award-winning and GRAMMY-nominated band has sold over 10 million records worldwide.

God Damn Evil is the follow-up to STRYPER’s ninth studio album, Fallen (Frontiers Music SRL), which released in 2015 and debuted at the top of the Billboard charts. 2016’s 30th Anniversary To Hell With The Devil Tour saw record crowds and featured the band’s largest sound and lighting production in nearly two decades.

“We all see and hear the darkness that surrounds us in our society but with faith and love, we’ll always have hope,” says Michael. “That’s what STRYPER is all about – powerful music and a message that builds foundations, not walls. We couldn’t be more excited about God Damn Evil as it showcases our undying love for what we do and why we do it.”