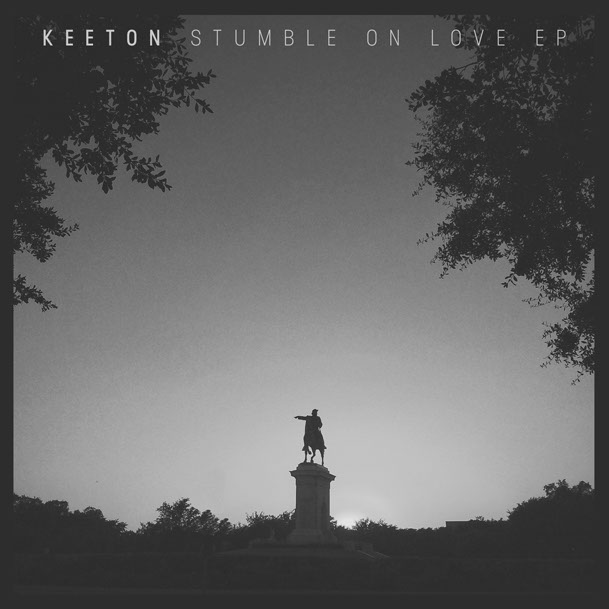 I thought that Keeton Coffman‘s music career may have ended when his band, The 71’s, dissolved earlier this year. Far from the case. Keeton dropped an awesome acoustic ep, Stumble On Love, Nov 8/13.

Fans of the ’71’s may be surprised at what Keeton has produced as a solo artist. Gone are the retro rock infused, arena anthems.  Songs that were all about being in your face. What takes its place is softer, poetic, acoustic numbers that announce Keeton as both a versatile musician and truly talented songwriter.

While Stumble On Love contains only four songs, they’re gems. Brilliantly illustrating the musician’s versatility comes the first and title track, “Stumble On Love”, which remains the sole exception to the following straight-up acoustic tracks. A rollicking number reminiscent of Springsteen’s “Born To Run” with lyrics that remain as a true testament to young love.

It feels better when you’re close to me.
Ain’t that the way that it’s supposed to be.
I ain’t sure what’s coming our way,
but we can make it good if it’s rough.
On the way honey, we might just stumble on love.

“The Prayer” is a radical departure from the opening track. Containing lyrics that could have been written by David in the book of Psalms. “The Prayer” is a lament to God, crying out for an answer, an answer that remains unresolved..

Father, is it a sin
that i can’t reconcile who You are with who You’ve been?
I know you can hear me as i pray,
so Father, save.

Stumble On Love finishes with a pair of tracks, Gone and Water In Wine, songs that can be considered brother and sister, in a lyrical sense. Each of these songs have Keeton creating a vocal style that continue to remind me of the early days of ’70’s folk rocker, Randy Stonehill. And each track recounts the trials of love.

Stumble On Love could easily be considered a “must have” based solely on the depth of the lyrical characters created, and the musicianship found on this recording. But that would be an over-simplification, Stumble On Love, expounds a lyrical and musical simplicity that profoundly cuts to your heart.